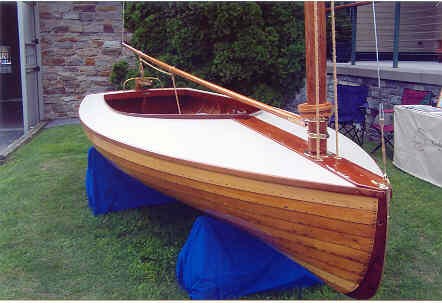 PROJECT: Remove and replace 12 steam-bent oak ribs, 12 cedar planks (approx. half of the hull), the entire decks, aft coaming and mast step. Remove, disassemble, repair, then re-assemble and install the centreboard trunk. Tighten original hull fasteners and perform misc. repairs throughout. Completely refinish the entire vessel (inside and out), and the 3 spars with 7 coats of Epifanes varnish. Strip and polish the original bronze hardware and supply new (period) rigging. 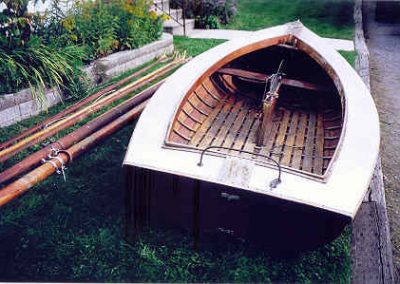 A tired little Aykroyd arrives at our shop. A multitude of horrors lies beneath the floorboards! 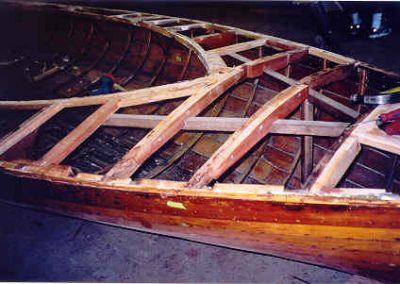 When the deteriorated decking is removed, we find more problems. Many years before, someone has ‘patch’ repaired the broken and rotted deck beams. 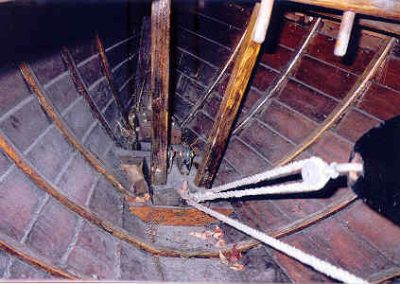 With the forward decks off, we can see that a new mast step will also have to be built. 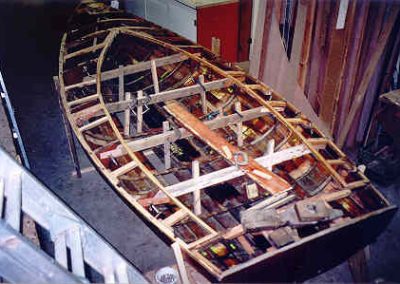 With the entire decks off, and a couple of planks removed, we affix temporary bracing to straighten the hull. 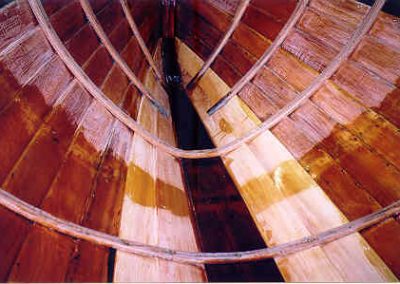 As the 12 steam-bent oak ribs are systematically replaced, the hull interior is partially refinished to seal the wood, prior to installing the new ribs. 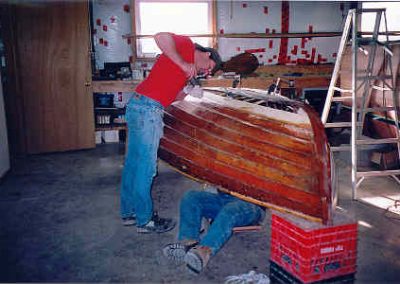 When ribbing is complete, new planks are made, sealed and installed. Here, two craftsmen are installing a plank which is copper clench-nail fastened. 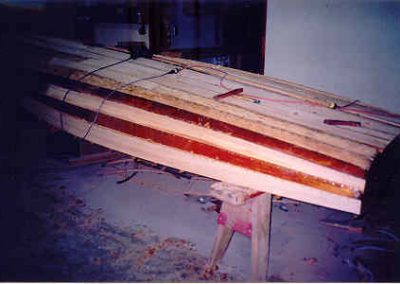 This photograph shows numerous new planks on the starboard hull. The new planks have not yet been trimmed to size at the transom. 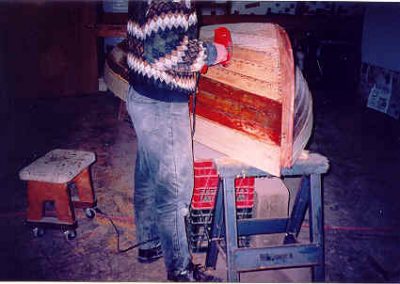 The remainder of the original varnish is now being stripped. The hull is then carefully prepared and sanded to our standards. 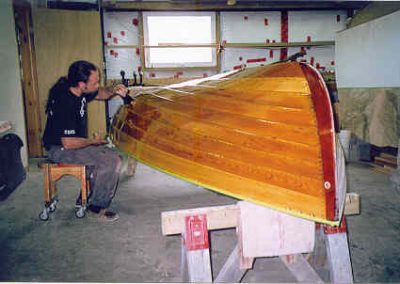 Here, the 2nd last coat of varnish is being applied to the hull exterior. The final coat will not be applied until the decks are on and the interior is installed. 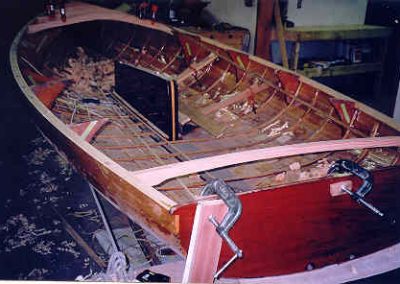 The original centeboard trunk has been completely rebuilt, and has now been permanently re-installed into the boat. 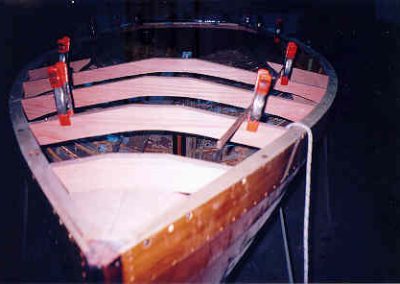 New deck beams have been made and fitted. They will then be removed, varnished and permanently reinstalled. 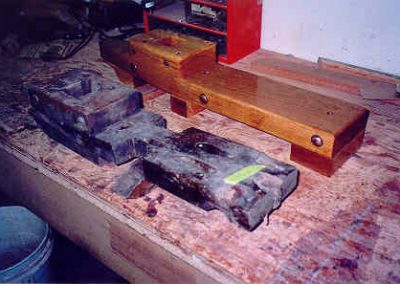 A new oak mast step has been built and varnished, ready for installation. The original one is shown in the foreground. 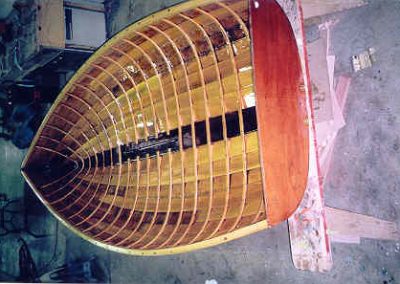 As the new decking is being properly sealed, the hull interior is given its final coat of varnish. 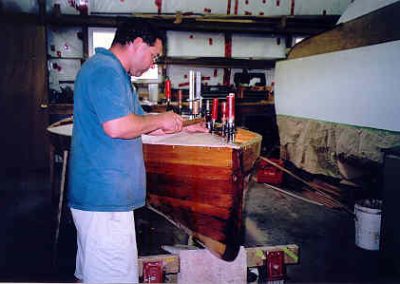 Numerous clamps are required to bend the new decks over the deck beams. The decks are fastened down with bronze ring nails – same as original. 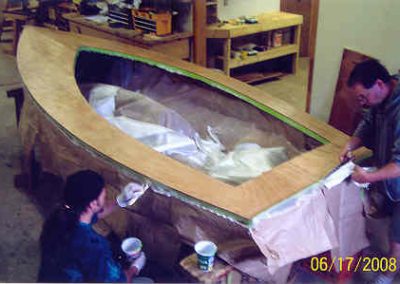 The new decks are then coated with several coats of epoxy for longevity. We then tightly stretch and fasten canvas overtop for that ‘original’ appearance. 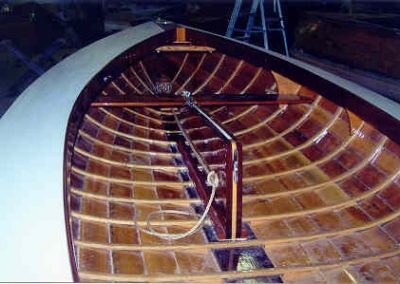 The canvas is then primed and painted, and the varnished seat and coamings are installed. 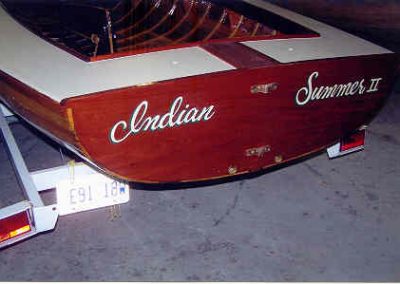 The name is hand-painted in 2 colours on the beautiful transom. The bronze hardware is stripped, polished and installed. 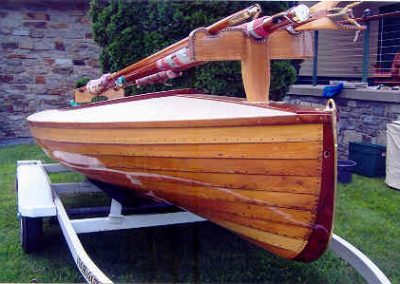 2 spar racks are built, varnished and leathered to protect and support the mast, boom and gaff while being stored or transported. 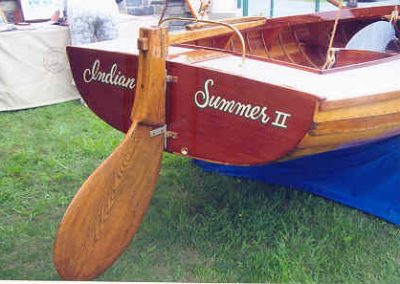 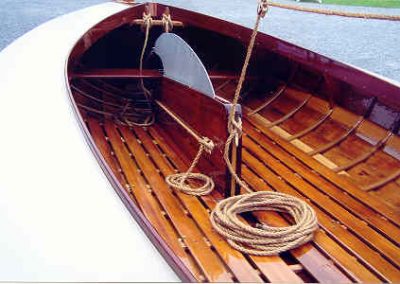 The original centerboard has been stripped and re-galvanized. This interior photograph also shows the new ‘period’ running rigging, as well as the beautifully varnished floorboards. 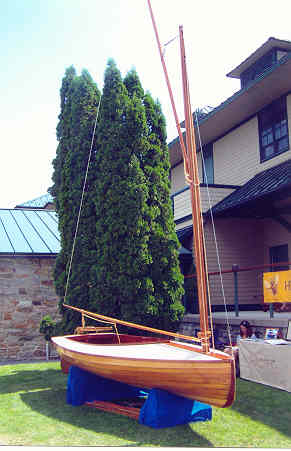 This picture shows “Indian Summer II”, rigged up and cleaned up just before the opening of the 2008 Clayton Antique and Classic Boat show. 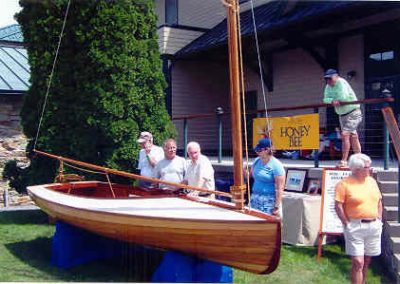 “Indian Summer II” attracts lots and lots of attention at the boat show. To our delight she is awarded “Best in Show – Non Power”. This is certainly a nice ‘reward’ for all our efforts!